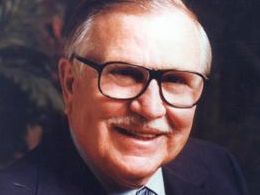 John Vernon McGee was born in Hillsboro, Texas, in 1904. Dr. McGee remarked, "When I was born and the doctor gave me the customary whack, my mother said that I let out a yell that could be heard on all four borders of Texas!" His Creator well knew that he would need a powerful voice to deliver a powerful message.

As a student pastor, Dr. McGee's first church was located on a red clay hill in Midway, Georgia. It was there that he received his greatest compliment: "It was from a country boy wearing high buttoned, yellow shoes. After a morning service he came to speak to me. He groped for words, then blurted out, 'I never knew Jesus was so wonderful!' He started to say more but choked up and hurried out of the church. As I watched him stride across the field, I prayed, 'Oh, God, help me to always preach so that it can be said, I never knew Jesus was so wonderful.'"

In 1967 Dr. McGee began teaching the Thru the Bible radio program as we know it today. After retiring from the pastorate, he set up radio headquarters in Pasadena, and the radio ministry expanded rapidly. Today the program airs on over 800 stations each day in the United States and Canada, is heard in more than 100 languages around the world and is broadcast worldwide via the Internet.