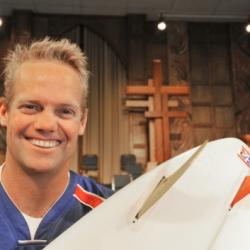 His pastoral calling began back in 1988 when he became an intern pastor at Calvary Chapel Vista in San Diego County. Three years later, in the spring of 1991, with the support and encouragement of his Senior Pastor Brian Brodersen, Joey, his wife Jennifer, and their first child, Hannah moved to Virginia Beach, Virginia to start a new Calvary Chapel. Over the next four years while ministering in Virginia, the Buran family would grow with the addition of their second daughter Leah and first son Timothy. In the spring of 1995, the family moved to Burlington, Vermont to start another new Calvary Chapel.

By 1997 they were back in California, where Joey became immersed in evangelism and other ministry as an itinerate pastor. It was during this time that their second son and final child Luke was born. In January of 2000, Joey was invited to come on staff at Calvary Chapel Costa Mesa. Over the next five years he would oversee the Worship Generation ministry, as well as extensive guest speaking and outreach ministry, primarily amongst youth, throughout the United States.

Beyond his 20 years of pastoral service, Joey has a long and varied relationship with the sport of surfing, and its culture worldwide. From 1978 – 1984, prior to committing his life to Jesus Christ, Joey was California’s top ranked pro surfer. During this time, he was known as the “California Kid” and won numerous professional events including surfing’s most prestigious contest, the Pipeline Masters, in 1984. In 1985 he retired from the pro tour and founded the U.S. Pro Tour of Surfing. After 10 years of Pastorate Ministry he came back to the sport and in 1998 won the ASP World Masters Championship in Puerto Escondido, Mexico. He was inducted into the Surfing Hall of Fame in 2009.

During the late 1990’s, he also worked for the well known surf company Billabong, where he managed and coached their top amateur team riders. In August of 2007, Joey was offered and accepted the position as Head Coach of the USA Surf Team. He continued in this role overseeing the Junior Team, and the Pro Team in training and participating in international competitions. This he did until June of 2009, when he resigned the position to focus on Ministry Opportunities created through the completion of the his biographical movie, Beyond The Dream.

For the next two years Joey with the assistance and support of the Worship Generation Congregation traveled and did tours in Hawaii, England, and South Africa with the movie. By 2011, over 25,000 copies ofBeyond the Dream have been distributed throughout the United States and the World! After touring England with Beyond the Dream, and holding Surf Coaching Clinics in August 2010, Joey was eventually approached and asked to become the Coach of the British Surf Team. In May he coached the team at the ISA World Junior Championships in Lima, Peru. In 2013, Joey visited Chile doing ministry outreach which included some surfing coaching clinics. In January of 2014, sensing God’s confirmation to go forward, Joey committed to become the Head Coach of the Chilean Junior Surf Team. He presently oversees the Junior Surf Team program while working in conjunction with the Chilean Surf Federation. This has included coaching the team at the 2014 and 2015 ISA World Junior Surfing Championships, as well as the Chilean pros at the 2015 ISA World Surfing Games.

Going forward in 2016, Joey continues to serve as the Senior Pastor, while seeking to fulfill the varied and unique ministry opportunities that open to him through his past involvement with the sport of surfing. He presently resides in Huntington Beach with his wife Jennifer and two sons Timothy, and Luke. His oldest daughter, Hannah, resides in Florida and is married to Nathan Gallagher (High School Pastor at CC Vero Beach). They are both very involved with Calvary Chapel Vero Beach. His younger daughter Leah and her husband Jakeh Bradley attend and serve together in ministry at Worship Generation.