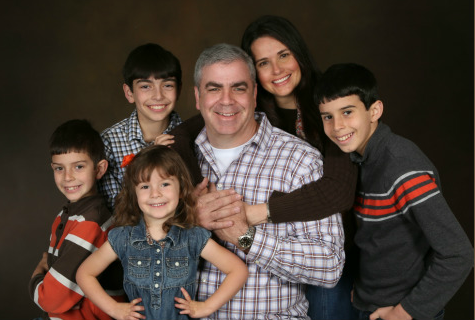 Pastor Rob accepted Jesus as his personal Savior at the age of eight, but it was not until his early twenties however, when he began attending Calvary Chapel in Fort Lauderdale, Florida, did Rob's faith develop and mature as he was taught the bible chapter by chapter, verse by verse.

During this time Pastor Rob was privileged to lead his fiancee, Rebecca, into a relationship with the Lord.  They married shortly after and grew in faith together under Calvary Chapel ministries in Fort Lauderdale and Boynton Beach, Florida.

In 2004, God led Pastor Rob to a home Bible study in Wellington, FL.  It was here that God began to call him into ministry.  As the bible study grew into a church, Pastor Rob developed his leadership skills as member of the Board of Directors and as an elder.  He also taught the Word of God in small groups, at conferences, and from the pulpit.  Rob's calling to be a pastor was confirmed by the Lord through the scriptures, prayer, and the counsel of other believers.  God also made it clear that Rob was called to Cumberland, Maryland, where he spent many memorable childhood summers visiting his grandparents.  To prepare for this ministry, Rob then began a training program under the direction of the Senior Pastor at Calvary Chapel Wellington.

In 2008, Rob was ordained as a Pastor and sent to plant a church in Cumberland, Maryland.  God has place a desire in his heart to reach the people of Cumberland with the message of the abundant life in Christ, received by anyone who accepts God's free gift of eternal life through faith in Jesus Christ alone.  He also desires to equip the saints for the work of the ministry by simply teaching God's word in depth, chapter by chapter, and verse by verse.

In the Spring of 2009, Pastor Rob began a bible study that met in the upper room of a local cafe, the Queen City Creamery.  That small bible study became Calvary Christian Fellowship of Cumberland.  After meeting several months at the Creamery, the Bible study moved to a Park Street, where the group met until 2012.  In December of 2011, the current property of 416 Pennsylvania Avenue was purchased and the church began to renovate the building.  After six months of work, in May of 2012, the first worship service was held.  In Spring 2013, the church was officially affiliated with Calvary Chapel.