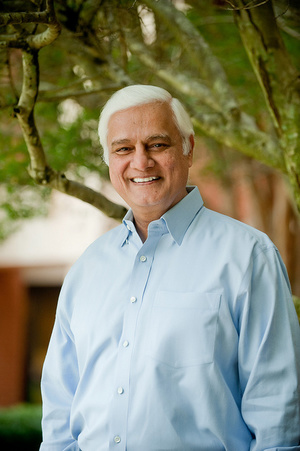 Ravi Zacharias is Founder and President of Ravi Zacharias International Ministries (RZIM), which celebrated its thirtieth anniversary in 2014. Dr. Zacharias has spoken all over the world for 43 years in scores of universities, notably Harvard, Dartmouth, Johns Hopkins, and Cambridge. He has addressed writers of the peace accord in South Africa and military officers at the Lenin Military Academy and the Center for Geopolitical Strategy in Moscow. At the invitation of the President of Nigeria, he addressed delegates at the First Annual Prayer Breakfast for African Leaders held in Mozambique.

Born in India in 1946, Ravi immigrated to Canada with his family twenty years later. While pursuing a career in business management, his interest in theology grew; subsequently, he pursued this study during his undergraduate education. He received his Master of Divinity from Trinity International University in Deerfield, Illinois. Well-versed in the disciplines of comparative religions, cults, and philosophy, he held the chair of Evangelism and Contemporary Thought at Alliance Theological Seminary for three and a half years. Dr. Zacharias has been a visiting scholar at Ridley Hall, Cambridge (then affiliated with Cambridge University, now more recently allied with Cambridge and affiliated with Durham University) where he studied moralist philosophers and literature of the Romantic era. He has been honored with the conferring of six doctoral degrees, including a Doctor of Laws and a Doctor of Sacred Theology.

Mr. Zacharias has authored or edited well over twenty books including the Gold Medallion winner Can Man Live Without God (Word, 1994), Walking from East to West (Zondervan, 2006), The Grand Weaver (Zondervan, 2007), Has Christianity Failed You? (Zondervan, 2010), Why Jesus, (FaithWords, 2012), and Beyond Opinion (Thomas Nelson, 2007), which includes contributions from RZIM’s global team. His latest books are a graphic novel version of The Lamb and the Fuhrer (Kingstone Media: June 2014) and Why Suffering?, coauthored with Vince Vitale and released by FaithWords in October 2014. Several of his books have been translated into Russian, Chinese, Korean, Thai, Spanish, and other languages.

Ravi has appeared on CNN, Fox, and other international broadcasts. His weekly radio program, “Let My People Think,” airs on 2152 outlets worldwide, his weekday program, “Just Thinking,” on 721, and his one-minute “Just a Thought,” on 488. Various broadcasts are also translated into Romanian and Turkish, and “Let My People Think” airs as the Spanish-language program “Pensemos” on over 250 outlets in sixteen countries. Additionally, his television program, “Let My People Think,” is broadcast internationally in several countries including Indonesia. RZIM is headquartered in Atlanta, Georgia, with additional offices in Canada, India, Singapore, the United Kingdom, the Middle East, Hong Kong, Romania, Turkey, Austria, Spain, and South Africa. Dr. Zacharias and his wife, Margie, have three grown children. They reside in Atlanta.