Jesus In Our Time 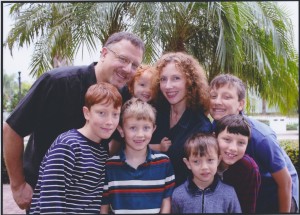 Doug Kinney came to the Community Bible Church in 1995 as a member of the congregation. Little did he know that it was God’s plan that he would one day become the pastor! Before coming to know the Lord, Doug was a professional musician & songwriter and the leader of a band called Suns of Jubal based in the Hamptons. Through the influence of Reggae music, Doug became interested in a religion known as Rastafarianism and in 1988 he became a Rastafarian, dreadlocks and all. Rastafarians believe in studying the Bible and so Doug began to read the Bible from cover to cover. In 1991 Doug began listening to Christian radio (WMCA 570 AM in NYC) where he began learning about the Christian faith. In 1993 Doug came to a crisis in his life and he had his “Damascus Rd.” experience where he met Jesus Christ and received Him as Savior & Lord.

Pastor Doug met his wife Meg at CBC and they married in 1999. Ironically, Meg is the Granddaughter of the founders of CBC, Bill & Harriet Steck.

Pastor Doug served at CBC as its administrator, then as youth pastor, and then as assistant pastor. When Pastor McGee retired in 2002 Pastor Doug was ordained by CBC and he began serving as Senior Pastor. Verse by verse Bible teaching is a main emphasis of Pastor Doug’s ministry at CBC.